Dreaming Is Okay, 2019, together with Susanna Hofer

Dreaming Is Okay originated from a cooperation between the Vienna Design Week, the Zinnfigurenoffizin Kovar and the photographers Susanna Hofer and Erli Grünzweil. The developed artist book is based on the theory of Homo Ludens, which discusses the play element between culture and society. According to his theory, every culture emerges from play. Kovar’s Zinnfigurenoffizin offers hundreds of different figures, an inexhaustible tin made archive of biographies, contemporary history, phantasy, locations and sceneries which open up and infinite space of interpretations. They interlude a playful current of awareness, which does not find an ending. The breakdown into ten chapters comes from the self set limits out of the thousands figures from Mrs. Kovar’s archive. The new order should detach and decontextualize the figures from its former meaning and biography. For example the dancer Fanny Eßler, originally one of the most famous Austrian dancers of the 19th century is presented as a fashion icon. The match of the main character in Andersens Schwefelhölzchen does not go out, the character evolves into a self reflected dialogue with herself. A cluster of trees images the present climate policy. All these chapters show a compilation of photography still lifes and pictures, which document the manufacturing process as well as the material of the research and investigations, which underlines again the playful point of origin. 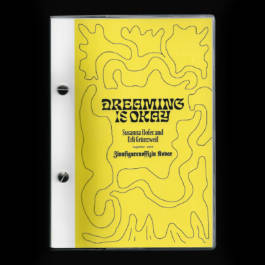 Dreaming Is Okay
105 pages
Edition of 10

COPYRIGHT All images and texts are copyrighted and owned by Erli Grünzweil. Under no circumstances shall these digital files, images, videos and texts be used, copied, displayed or pulled from this site without the expressed written agreement of Erli Grünzweil. © 2021 Erli Grünzweil DISCLAIMER Erli Grünzweil is not responsible for the content of any linked external website. Imprint, Privacy Policy
Erli Grünzweil
Erli Grünzweil
This website uses cookies to improve your experience. I’ll assume you're ok with this, but you can opt-out if you wish. Cookie settingsACCEPT
Privacy & Cookies Policy

This website uses cookies to improve your experience while you navigate through the website. Out of these cookies, the cookies that are categorized as necessary are stored on your browser as they are essential for the working of basic functionalities of the website. We also use third-party cookies that help us analyze and understand how you use this website. These cookies will be stored in your browser only with your consent. You also have the option to opt-out of these cookies. But opting out of some of these cookies may have an effect on your browsing experience.
Necessary immer aktiv
Necessary cookies are absolutely essential for the website to function properly. This category only includes cookies that ensures basic functionalities and security features of the website. These cookies do not store any personal information.
Non-necessary
Any cookies that may not be particularly necessary for the website to function and is used specifically to collect user personal data via analytics, ads, other embedded contents are termed as non-necessary cookies. It is mandatory to procure user consent prior to running these cookies on your website.
SPEICHERN & AKZEPTIEREN